"Nope. Rehab and the program do, though. And I've become a very good poet. Wanna hear one?"

Selma Ann Forrester, called Selmers by Mae, is a friend and fellow neighbour of Mae on the block in Possum Springs.

Selmers is a brown bear with brown eyes. She is often found wearing a purple hoodie with a yellow face in the centre, a black skirt, and blue shoes.

Selmers is a laid-back and easy-going person, often found resting on the stoop of her house. She enjoys poetry and has gone as far as to join the Possum Springs Poetry Society to share her works.

Selmers is a former opioid addict who stole painkillers from the Ham Panther pharmacy at which she worked. This resulted in some jail time. However, she eventually became clean after going through rehab and the program.

Like Mae, she is currently unemployed and living with her folks on Maple Street, but has taken to poetry in the meanwhile, even becoming a member of the Possum Springs Poetry Society along with Miss Quelcy and Fisherman Jones.

Selmers also used to be married to someone named Dennis but split with him during his prison job in Briddle when he met a new girl at a gas station.

At some point, she was told by Dr. Hank to use a journal to cope with her issues. This didn't work out, and she stopped using the journal.

Night in the Woods

Anytime Mae can walk around the town, Selmers will always be on the stoop of her house. The player can choose to interact with Selmers each time in starting Part 2, will always give the player the option to listen to a poem. She will also notify Mae whenever Mr. Chazokov is up on the roof, excluding the first time.

Selmers will tell Mae a new poem every day from Part 2 until Part 3. If you listen to every one of them, you can gain the achievement Poets of Possum Springs.

Sometimes
I think.
And start
To sink.
Then I remember
It's Octember.

Sometimes
I like fruit snacks
Out by
The train tracks
A juice box
And headphones
I enter
The juice zone.

Bats and moon
Against the gloom
The night is black
I made a snack
I microwav'd
Pizza I'd sav'd
Tho pizza cold
Is breakfast gold.

"There's No Reception in Possum Springs"
No reception here
I wave my black phone
In the air like a flare
like a prayer
but no reception
I read on the Internet baby face boy billionaire
Phone app sold made more money in one day than my family over 100 generations
More than my whole world ever has
World where house-buying jobs became rent-paying jobs became living with family jobs
Boy billionaires
Money is access access to politicians waiting for us to die lead in our water alcohol and painkillers
Replace my job with an app replace my dreams of a house and a yard
With a couch in the basement
"The future is yours!"
Forced 24-7 entrepreneurs.
I just want a paycheck and my own life
I'm on the couch in the basement they're in the house and the yard
Some night I will catch a bus out to the west coast
And burn their silicon city to the ground

I got mad one time
It was online.

Life goes on
It feels so long
But I report
Life is too short.

Life is great
But life is hard
Let's grill hot dogs
In the backyard.

The stars the stars
Like lights on cars
Drive 'cross the dark
And never park. 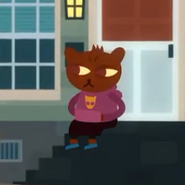 Add a photo to this gallery

Retrieved from "https://nightinthewoods.fandom.com/wiki/Selmers?oldid=14521"
Community content is available under CC-BY-SA unless otherwise noted.