Margaret Borowski, better known as Mae, is the protagonist of Night in the Woods.

Mae is a cat with dark blue fur and dyed red hair on the top of her hair, which has since faded into a dark red. She has large red eyes. Her right ear is also notched from a dog attack, and Mae can be seen flicking this ear frequently throughout the game while idle.

Her attire consists of an orange shirt with long red sleeves, with a slashed zero design in the center. Mae also has dark grey jeans and wears boots that are described as "cheap green-ish knock-off Doc Martens". [1]

Mae is noticeably shorter than others in Possum Springs and considers herself to be overweight. Her grandfather called her "sturdy," an assessment that Mae ultimately agrees with, and worries that her style of clothing accentuates her "roundness".

Mae Borowski has a troubled past, primarily with depression and anger issues. She was instructed to "repress" these issues by Dr. Hank. Her emotional turmoil is later revealed to be a byproduct of a dissociative disorder. She can be seen as a disrespectful person, even referring to herself as "a jerk". As the game progresses, her more compassionate side is revealed. One example of this is when she comforting others, especially her friends, during emotional moments. She seems to worry about Bruce and appears to genuinely care for her "rat babies" once she discovers them, even stealing pretzels from the pierogi stand in order to feed them. She greatly loves and cares for her friends, and isn't afraid to express this. Mae is rather nostalgic and often reminisces about Possum Springs as it was when she left for college. During the game, she is often reflecting on how much the town has changed since her absence. In addition, Mae is known to be energetic and agile, enjoying to climb things whenever possible. Her close friends and family (and the police) reference her habits of climbing electrical poles, tightrope walking on the power lines, and general running around and jumping.

Mae was born in either 1996 or 1997, being age 20 in the year 2017. She is the only child of Candy and Stan Borowski, whose families worked the coal mines in Possum Springs for multiple generations. Since the mine closed the two parents worked and saved money to enable Mae to be the first member of the family to attend college. Mae went for three semesters but eventually dropped out due to her dissociative disorder and moved back into her parents' attic in Night in the Woods.

Mae has always been a bit troubled: dissociation, depression, no direction and recently, a connection with what she believes to be paranormal activity in the town. When she was in high school her dissociation caused an incident, leaving her with a poor reputation in Possum Springs. She had no idea how to cope with these feelings, but after returning to Possum Springs, she begins to notice something suspicious going on in town, a trail of clues leading up

In Lost Constellation Mae is shown to be younger and asked her grandfather about robbing a bank at a young age, but they then enter into a conversation about jail, where Mae asks her grandfather to tell her a ghost story. This then leads to the main storyline of the game, with Mae interrupting the story to comment on certain portions of the story.

Mae's parents and her Aunt Molly are central characters in Night in the Woods. Her Granddad passes away before the events of the game, thus never making an appearance in the actual game and is only known through characters mentioning him or through supplemental games.

Day/Night 1- The game starts off with Mae reading off white dialogue on a black screen. The player can choose several options for the dialogue. The full dialogue reads as this:

In the year Granddad died

We had the worst flood since 1998 / the highway extension came

Granddad left me an apple crate of books

And quoted them to himself on the hospital bed

"They went looking for the gods / They feared death / In their wings, in their trees

and died in lonely places / So they ate the young / All things die, be at peace."

on his last day

he sat up suddenly

and stared bug-eyed through the window

he turned to my dad

"this house is haunted"

After the dialogue, the player controls Mae in a bus station visiting her hometown of Possum Springs. On the left, you will run into a TV. When the TV turns on, it will switch to a show named "Garbo and Malloy".

Heading further left, the player will encounter The Janitor. He'll ask you to get him a Fiascola, which you have to get from the Fiasco Fox Vending Machine in order to progress the game. After acquiring the Fiascola, Mae gives it to the Janitor saying, "One freeasscola.". The Janitor then lets you through, and you end up at the Train Station.

In the next scene, Mae is found at the old abandoned Sawmill Park. She is able to interact with the broken ship, saying that it's "just a thing for weird animals to eat and have babies in.". To progress onto the next scene, Mae must 'triple' jump from the ship onto the branch, then jump and walk on the wire. Once she reaches the far left, she will fall onto her stomach and be caught by Aunt Molly. She will tell Mae that she found her "in the very off-limits playground" and will tell her to "get in the car.". Mae will say no to this, and Aunt Molly will respond, "Do you want to spend your first night back in jail, Mae?", with which Mae replies with "No."

After getting in the car, Mae will arrive at her house. Stan Borowski is seen sitting on the couch, and Mae will go to talk to him. She mentions that he was not there at the train station to pick her up, and Stan replies with, "I thought you were coming home tomorrow night!", which Mae replies with, "You thought wrong!". Stan asks Mae if she said 'hello' to Aunt Molly for him, which she says, "I say hi for no one. Eff the cops!". She then says she will go to bed, and after the last dialogue, the first journal entry is made, reading, "". She will then go to bed, triggering the end of Day 1.

To get the Gregg ending, the player must:

To get the Bea ending, the player must:

Mae and Gregg in the Snack Falcon

Interior of the Party Barn, where the band practices

Mae, dissolving into shapes at the end of her dreams

Earlier version of Maes room from the kickstarter trailer 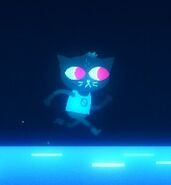 Mae's appearance in her astral dreams. 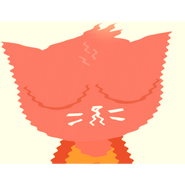 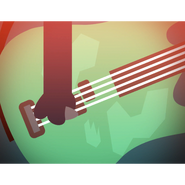 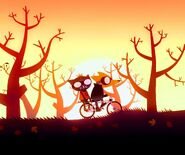 Mae is skeletonized during the hardest part of Pumpkin Head Guy

Mae's as seen in 'Lost Constellations' 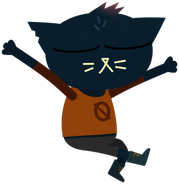 Mae stretching after waking up from sleep. 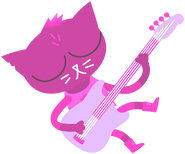 Mae as seen in bass practice. 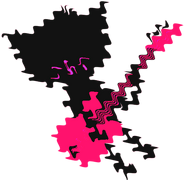 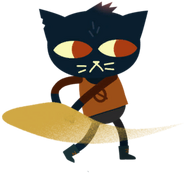 Mae with her bat

A baby Mae and her Dad.